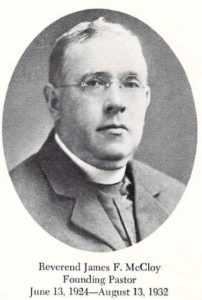 In 1924, the original parishioners of St. Helena attended Sunday Mass in a row home on Fairhill St. As the number of Mass attendees grew, a bigger venue became necessary. Through the kindness of its owner, the Olney movie theater was transformed into a place of worship on Sundays.

Our founding pastor, Fr. James McCloy received permission to build a combination church and school. Ground was broken for the first parish building, on the feast of St. Helena, August 18, 1924. On September 14, 1924, the Sisters of St. Joseph began their teaching ministry at St. Helena. They traveled from St. Mary’s Academy to give religious instruction to the children until the new St. Helena School opened with 438 students on September 6, 1927. Fr. McCloy fell ill during his visit to Ireland in 1932 to the Eucharistic Congress. Following his unexpected death, Fr. Joseph McDowell continued the work of building. A basement church and a convent followed. The first floor in the original parish building was also converted from church to classrooms in order to meet the needs of a rapidly growing parish. Fr. McDowell’s leadership and the sacrifices of St. Helena parishioners during the depression times, resulted in debt clearance and financial resources. This enabled them to gain the Archdiocesan approval to build a rectory in place of the 3 houses on Lawrence St. Fr. McDowell died on July 8, 1945, before the building could be erected. 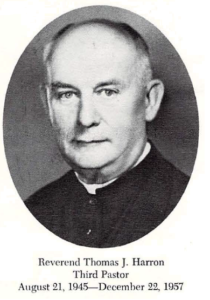 Fr. McDowell’s dream was realized by Fr. Thomas Harron, who succeeded him on August 21, 1945. The new rectory on the corner of 5th St. and Godfrey Ave., was the first building built in the archdiocese after WWII. Growth in Olney after the war resulted in permission to build the majestic Romanesque upper Church. The upper church is a legacy and a tribute to the devotion, sacrifices and generosity of the hard working parishioners of St. Helena.

After Fr. Harron’s death on December 22, 1957, the then, Msgr. Francis Furey was named pastor of St. Helena. Responding to the rapid post-war population growth, Msgr. Furey realized the urgent need for a new 3-story school building on Spencer St. It opened on September 1959 with an enrollment of 1,350 children. On August 27, 1960, Msgr. Furey was appointed Auxiliary Bishop of Philadelphia, to be named Coadjutor Bishop of San Antonio after a 3-year pastorate.

On January 8, 1964, the then Archbishop John Krol, appointed John Graham, Auxiliary Bishop ofPhiladelphia, pastor of St. Helena. At the height of the population boom of the 60’s, Bishop Graham received permission to complete the 3rd floor of the convent, add a 4th floor to the Spencer St. building, and completely renovate the original school building. The additions and renovations accommodated the enrollment which peaked in 1967 at 1,839 students. 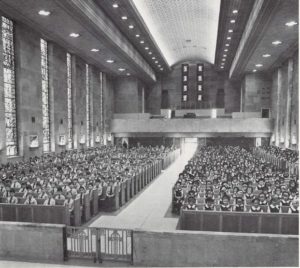 In preparation for the consecration in the 1974 Jubilee Year of the parish, repair and renovations in both upper and lower churches followed. In addition to his Episcopal responsibilities, Bishop Graham guided St. Helena parish for 27 years until the acceptance of his resignation as pastor by Cardinal Bevilacqua. Bishop Graham became the first Pastor Emeritus of St. Helena parish.

Fr. Thomas P. Gaynard was installed as the 6th pastor of St. Helena on September 29, 1990. For the years that followed, Fr. Gaynard tended to the physical needs of an aging and changing parish population, while struggling to keep the parish on a firm financial basis, until his appointment as pastor of Mother of Divine Providence parish in June 1996.

On June 23, 1996, Fr. Craig Brugger became the next pastor of St. Helena. He readily took up the challenge of change. The needs of the now culturally diverse parish community became a priority. Involvement in community and social outreach programs were initiated. Fr. Brugger ushered th culturally diverse parish into the new millennium with the parish slogan which he initiated “From many lands, united in one faith, enriched by many blessings.” 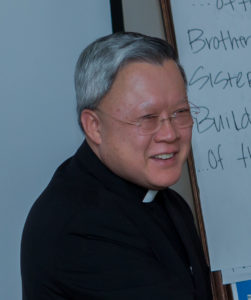 In March 2002, Fr. Joseph Trinh was appointed pastor to succeed Fr. Brugger. Diversity has become the hallmark of St. Helena parish. Through his years as pastor, the now Msgr. Trinh, continues to meet the spiritual and temporal needs of this culturally diverse parish. Involving the talents of the men of the parish through the establishment of the St. Joseph the Worker Society has helped to maintain the parish buildings with little financial resources. Despite the magnitude of his present pastoral responsibilities, Msgr. Trinh exhibits cheerfulness and cordiality.